Cordless Power Tool Battery Guide for buying battery powered tools. There is no doubt that when you look to buy a power tool today that you almost certainly look to see if there is a battery powered version. With the advances in batter technology that means pretty much any tool that was previously corded has a battery powered option. As with most things in life not all batteries are made equal and in this cordless power tool battery guide we will look at what the differences are and hope to make sure that you buy the the right tool for the job. The ubiquity of the cordless power-tool

What Are Amp Hours (Ah)?

One of the most important topics in any cordless power tool battery guide is understanding amp hours usually displayed on the battery or the packaging as Ah.

Amp hours is just a unit of measurement has nothing to do with power and it’s a totally different unit than amps. Amps is used to describe amp hours, but those are two completely different things. If a battery has a capacity of at least 4 amp hours, it will be prominently displayed somewhere on the battery, like this one, which is a 5 amp hour.

Amp hours describe the “capable charge” of a battery. If for example you see 5 amp hour (5Ah) on a battery it implies that it can draw 5 amps of power continuously for 60 minutes, before this battery loses power. What needs to be understood though is that this measurement is subject to ideal conditions such as optimum temperature, zero vibration and consistent power. Of course in real world use you are probably not going to have those metrics which is why is described as a “capable charge”. In practice the best way to look at amp hours is to think of one battery holding its charge longer than another.

Batteries work in terms of the number of cells that they have. For example, a 18v battery could have five 3.6v and 2Ah cells, connected in series. In terms of voltage you would add up the value of the cells to get the overall voltage, However you cannot do this in terms of amp hours. You would still only have 2Ah with the five cells joined in series

This, of course, tends to mean that batteries with high Ah’s are to larger as you have to accommodate two sets of cells in each battery.

The simple answer is no, although as with most things it is slightly more nuanced than that. In terms of metrics amp hours do not equal power. Power is provided by the amount of volts that the battery back has. However, in practical terms you will generally get a little more power out of batteries with bigger Ah’s.

The reason for this is that for in a battery with two banks of cells, it is doing half the work of a battery of one bank of cells of the same voltage. This means less power is leaked through temperature caused by the internal resistance of the cell. The more work it does in discharging the power the hotter the battery will run. Thus is the discharge is spread over more cells there will be less power loss.

Voltage is the next aspect that our cordless power tool battery guide will consider. As we have seen with our analysis of amp hours the Ah rating of a battery is indicative of the the lenghth of time batter pack at full capacity can last. Endurance, however, means little if it doesn’t have the power to go with it.

This is where the voltage rating of a battery becomes important. However there isn’t necessarily a ratio between the voltage and the amount of power generated in terms of power tools.

You see the voltage rating of a battery is indicative of how much potential is in a battery, but that potential is not an actual measure of energy. To ascertain the actual power a batter will produce we have to also consider capacity and the mechanism driving the tool and how efficiently the “potential” is utilized.

It is true to say that a batter with a higher voltage will spin the motor faster but to determine power we also have to look at the rate of flow. So to establish the power we have to combine it with the amps. In electrical terms this is called the Watt hours. For example if the battery cell has a voltage of 3.6 volts and a capacity of 2 Ah then the power will be 7.2 Wh. So the equation is Power = Voltage x Current.

Sadly, it is still slightly more complicated than that. As we have said the actual power of the tool is not only governed by the energy the battery produces but also by how that power is utilized by the tool. Having the most powerful battery pack can be rendered obsolete by having an inefficient motor or a drive mechanism that loses too much power in delivery. This of course is almost impossible to determine from the specs and only becomes apparent when using a cordless power tool.

In terms of this cordless power tool battery guide, now that we have looked at the structure and make up batteries, it is time to consider other issues like manufacturer and compatibility. Just because a batter is the most powerful doesn’t necessarily mean it is the best fit for your tool kit. There are multiple other factors at play that should determine this.

As we touched on when we talked about voltage the actual manufacture of the tool is also critical to the eventual power produced. Whether you are a home enthusiast, a d.I.Y expert, a tradesman or actually use battery powered cordless tools in a workshop or the factory floor, although in the latter two scenarios you should really be considering air tools. 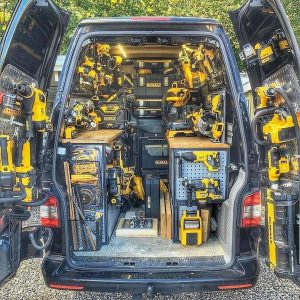 The answer is probably not, unless you have plenty of money! The reality is that each of the brands has its own battery system and generally speaking one manufactures battery system is incompatible with another. In the battery powered tool world it pays to keep to one, or possibly two manufacturers. By doing this you likely to find that the batteries are interchangeable between tools which massively helps in terms of productivity. It is likely to mean having to purchase fewer additional batteries and likely having a ready charged battery on-hand should it be needed.

Of course, in certain circumstances another manufacturers cordless power tool is so good or so much better than your usual tool brand that it pays to buy it. However, it makes no real sense to buy battery powered power tools from numerous different brands. When compiling a power tool kit for yourself it pays to put a little for thought into what you are going to need over the longer term and then choose the brand, that on a whole, best suits your needs. Cordless Power Tool Battery Guide

If you have read through you will know that the best battery is not necessarily about headline numbers on an advertisement or the side of a box. And whilst the brands bandy about sexy numbers it often comes down to your tool kit as a whole as much as the current best battery when choosing your battery powered tool

In our cordless power tool battery guide we have tried to try to explain the relationship between amps, volts and watts in terms as easy to understand as possible but generally also how it relates to the battery of a cordless power tool. If you are interested in knowing more about the relationship between these three power measurements then you can find out more here.

Clearly there is a lot to making the right decision as it is likely that you will be using the brand for a considerable time. The biggest brands are all excellent and it probably will come down to personal preference. However there are some great niche tools out there and if your pocket can run to it then the odd outlier in the tool kit.

As a cordless power tool battery guide you might be expecting us to make some sort of definitive recommendation on the best battery system. In the end though, it is going to come down to what you can afford, and probably which brand appeals to you most. It really is going to be what works for you. The chippy (carpenter) down the street, the plumber that mends your sink their choices may not be optimal for your needs or your budget.

The only way around it is to go out there, do your homework, test the tools before you buy and then embrace your choices. We won’t be able to work forever, and we sure ai’t putting them in our wooden box. So buy and make sure you use them to their fullest capacity.

I’ve been involved in the welding industry for over twenty years. I trained in various engineering shops working on various projects from small fabrication and repairs through to industrial projects.I specialize in welding aluminum and food grade stainless steel and an now run an engineering shop fabricating equipment for the food industry.