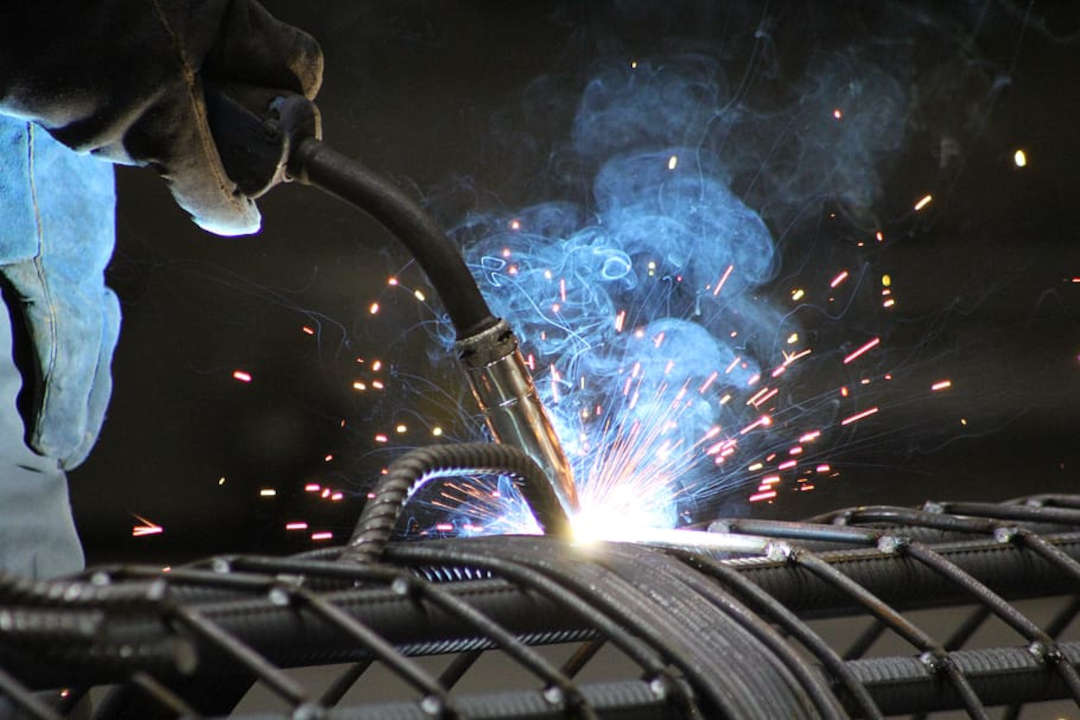 The current flows from the power source to the work-piece through the electrode wire and then back to the ground or earth via the metal object being joined. The direction of this flow depends upon whether we are using direct-current, alternating-current, or pulsed DC welding processes.

In AC welding, the current reverses its direction at regular intervals. In DC welding, there is no reversal of the current. When you use the correct polarity for your application, you can achieve excellent results. The key question though is when to employ reverse polarity welding.

Current and Polarity in Welding

Welders despite being a practical skill still need to have a good amount of technical knowledge in order to be a good welder. One thing that you’ll hear a lot in the workshop is “welding current.” The reason for this is that welding machines and electrodes are labelled AC or DC, indicating the polarity of the welding machine’s current.

What is polarity in welding?

When you switch on the welder, an electrical circuit is formed with a negative and a positive pole – this feature is known as polarity. Welding is heavily reliant on polarity and therefore very important in welding since it influences the quality and effectiveness of the weld. Using the incorrect polarity may result in a lot of spatter, poor penetration, and a loss of control over your welding arc.

DC current flows in just one direction, producing a constant polarity. With a 60-hertz current, AC as its name suggests alternates the flow of the current. Half the time it will flow in one direction and other half of the time in the other. This all happens in the blink of an eye with the polarity alternating 120 times every second (depending on power supply). So, if a welding equipment is designated DC, it has continuous polarity, while if it is labelled AC, the polarity will fluctuate.

So, how do AC and DC welding differ?

It is critical for a welder to grasp the definition of polarity and how it impacts the welding process. Electrode-positive (reverse polarity welding) welding typically results in deeper penetration. Electrode-negative (straight polarity) welding causes the electrode to melt off faster, resulting in a faster deposition rate. The volume of filler metal melted into the weld joint is referred to as the deposition rate.

DC welding has several advantages, making it a preferred alternative for stick welding (shielded metal arc welding or SMAW for short). This approach makes it easy to hit the arc and produces a smooth, steady arc. It also lowers spatter and the likelihood of outages, and can assist you in avoiding difficulties while overhead or vertical welding.

AC welding, on the other hand, is frequently utilized with cheaper, entry-level gear, making it an excellent choice for welding instruction. A lot of welders use it when conditions cause the arc to move.

When the plates are positive and the electrode is negative, direct current straight polarity occurs. As a result, electrons go from the electrode tip to the base plates.

Straight polarity results in a faster melt-off of the anode and, as a result, a faster deposition rate. The state may vary as a result of the action of various substances in the covering.

Let us now go into reverse polarity in greater detail so that you may grasp a better understanding of it.

This happens when the electrode is turned positive while the plates are turned negative. The electrons then travel backwards from the base plates to the electrode.

If the power source is an alternating current (AC), then each cycle will have both straight and reverse polarity. The electrode will be negative for half of the cycle, and therefore the base plates will be positive. The base plates will be negative on the other half, and the electrode will be positive. The number of cycles that occur in a second is determined by the frequency of the power supply.

The current flows from the power source to the workpiece through the electrode wire and then back to the ground or earth via the metal object being joined. The direction of this flow depends upon whether we are using direct-current, alternating-current, or pulsed DC welding processes.

In AC welding, the current reverses its direction at regular intervals. In DC welding, there is no reversal of the current. When you use the correct polarity for your application, you can achieve excellent results.

If the electrode is connected to the positive terminal and the base plates to the negative terminal of a direct current (DC) power source, it is referred to as Direct Current Electrode Positive – or Reverse Polarity welding.

Electrons are liberated from the base plate and travel to the electrode through the outer circuit. The arc is created by the continuous flow of electrons in the tiny channel.

Because of the potential difference, electrons released from the base plates are accelerated and strike the electrode at a high velocity. This converts the kinetic energy in the electrons to thermal energy, resulting in heat production at the electrode tip.

As a general rule, approximately two-thirds of the total arc heat is created at the electrode, with the remainder generated at the base plate. As a result, the electrode quickly melts, and the deposition rate for consumable electrodes rises.

The base plate, on the other hand, does not fuse correctly due to a lack of adequate heat, which can result in flaws such as lack of penetration or excessive reinforcement.

The flow of electrons that travel from the base plate, on the other hand, separates oil and dust particles, which coats the oxide layers on the surface of the plates you are welding. This is referred to as oxide cleansing action.

Why Is Reverse Polarity Important?

If you don’t know what polarity means, here is why it matters as it will help in your decision on whether to use reverse polarity welding or not:

1) If you have not chosen the proper polarity, you will end up with weak joints and low penetration rates.

2) You might also experience excessive heat buildup which could lead to burnout.

3) Your arcs will tend to wander off course as well.

4) And finally, if you choose the incorrect polarity, you will produce lots of spatter.

5) So, how do you determine when you should use reverse polarity welding for your project? Let’s find out!

When Should You Use Reverse Polarity Welding

Using the correct polarity might mean the difference between a great weld and one that is poor being porous and probably weak, or between a weld that receives adequate penetration and one that receives none at all. Aside from the terminology, it might be difficult to determine when to utilize reverse polarity welding.

The vast majority of welding rods require positive polarity for stick (SMAW) welding. In reality, almost all welding rods are predominantly positive (reverse) polarized. With a few exceptions, running on thin sheet metal should always be done in reverse polarity. Because the phrase “Reverse” might be confusing here best way is to simply imagine “positive torch” and you’ll be OK.

MIG welding will always be positive polarity. Some individuals mix up MIG welding and flux core welding. They are not the same, even if the equipment utilised is similar or identical. Flux core employs a wire with a powder flux in the middle of the wire. It is a good solution when welding in windy situations and provides go-anywhere performance. While it is not inherently better or worse than MIG, it does use straight polarity, which is the polar opposite of MIG. However, certain wire manufacturers may advocate positive polarity, so read the label carefully.

It is though, important to keep in mind is that MIG and Flux Core wire do not share “optional” polarity. It will only run successfully if it is affirmative. By utilising a flux wire and shielding gas, dual shield wire combines the advantages of MIG and Flux Core. Of course, always follow the polarity suggestion of the wire manufacturer, but dual, or outer shield wire, is often reverse polarised.

TIG welding is an exception, as it always welds with the flame in the negative terminal (even if welding in AC mode there are reasons to keep the torch plugged into the negative side). Years ago, DC positive was used to weld aluminium, but penetration was poor and it required huge diameter tungsten to weld at relatively low amps owing to heat being concentrated on the tungsten tip rather than the base metal. Because aluminium welding is so simple with AC tig machines with either high frequency overlay or inverter type welders like the Everlast PowerTIG series, just DC negative torch polarity is used.

Regardless of the polarity, you may need to use an aid to memory to assist you recall the polarity words. Even if you have to put a note on your welder to assist you remember which “torch” side to use, it will help you get it correctly the first time and reduce irritation to a minimal.

Still not sure on which polarity to use?

There are several ways to to ensure that reverse polarity welding is correct for the given job. Here they are:

1) By looking at the manufacturer’s instructions.

3) Or by asking someone who knows about these things.

4) Finally, you should always check the manual before starting your next project.

Now let’s take a look at each method in more detail.

Manufacturers usually provide information regarding their products’ polarity requirements. They often include diagrams showing the orientation of the electrodes relative to the workpieces. These illustrations help you understand the best way to set up your machines and should explain the circumstances in which to use reverse polarity welding .

You must pay close attention to the diagram because it shows where the wires need to be connected. For example, if you’re working with aluminum, you would connect them together like this:

Another great resource for learning about polarity is YouTube. There are many videos available that explain everything you want to know about setting up your equipment correctly. Some of these videos even show you step-by-step procedures for doing just that.

Here are some examples of where you should employ reverse polarity welding :

Method 3 – Ask Someone Who Knows About This Stuff

Finally, you can ask someone who has done similar projects before whether reverse polarity welding is the correct way to go. He/she can tell you exactly how he/she did it. It doesn’t matter whether he/she was paid for his services or not; all you care about is getting good advice.

So, when you get ready to start another project, make sure you consult one of the methods above first. Then follow those steps carefully until you reach success.